At Abiquiu on 16 June 1838, Miguel Montoya sells lands to Damaso Lopez, residents of the jurisdiction; lands he inherited. [495] 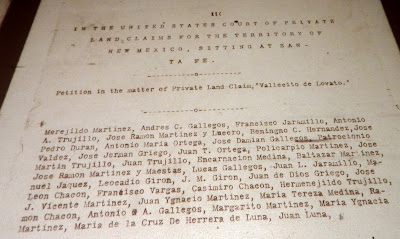 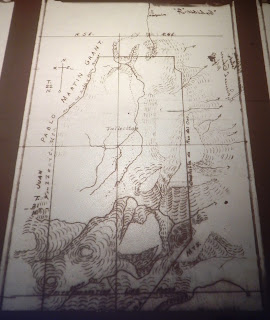 On August 24, 1740, Juan Jose Lobato of Ojo Caliente and a vecino of Santa Cruz asks for some land.  The land itself had previously been granted to Diego Torres which causes some problems, but Lobato appears to overcome that small issue.

Jose Isabel Martinez testifies that he is 71 or 72 yeards old, a son of Ygnacio Martinez and grandson of Jose Pedro Martin Serrano.  He brings the wills of his father and mother to this testimony, which they make a copy of.

There is a deed transfer from Cristobal Torres, his wife, Angela Leyba and a son Diego Torres to Juan Lujan, which includes a house lot, corral and a garden tract, written in 1726. [168]

Bartolome Trujillo (Margarita Torres) states that lands were given to him by his father-in-law, Cristobal Torres, and that Jose Trujillo (Antonia Lujan) is his father, written in 1731.[175-176]

At Abiquiu on April 16, 1750, they have a copy of the lands owned by the Valdez family.  Miguel Martin, Juan Jose de la Cerda, Geronimo Martin, Ignacio Baldes, Juan Baldes for his mother Rosalia Baldes, and Manuel de las Rosas plus thirteen half-breeds make the resettlement at the plaza where the chapel is situated. [207]

The son of Rosalia Valdez, Juan Bautista Valdez applied for his own grant in 1807 and it was granted.  These documents reveal quite a bit more of the family history.

The lands were owned by J. B. Valdez and then his children who are:  Jose Miguel, Francisco (never married nor had children), Jose Antonio and Antonia Rosa Valdez.  (frame 413)


In continuing the Plaza Colorado Grant granted to the Valdez siblings, there is one more document dated 22 September 1798, that states Lorenzo Valdez and Juan Domingo Valdez, the former stated that he owned land by inheritance from his father, Francisco Valdez and he did sell to Juan Domingo Valdez for 200 pesos.  Bounded by lands of Lucercio Martinez and Ysidro Luna. (frame 585)
A new name here is Francisco Valdez as a father of Lorenzo Valdez; could this be the next generation or just another son of Rosa?

~  This has to be the Francisco Valdez that married Getrudis Martin and had a son Manuel Lorenzo.  Since Juan Domingo is named as a grandson of Rosa Valdez.  Francisco and Getrudis have a daughter they name Rosa, likely after the grandma (his mother).

This is a thin dotted line on these people in trying to connect the dots.  I am wondering what other materials are at the archives that could help solidify this connection.

Using records that pertain to padrinos, etc., this is starting to feel like the correct connections.|

Pablo Gallegos is stating he's a descendant of Rosalia, his father's mother was Magdalena Valdez; although his memory isn't that good.  (Frame 376-377)

Based on some of the testimony it appears they don't all know the relationship back to the original grantees; but there is enough data to make many connections.

Julian Valdez married to Margarita Velarde.
He's the son of Valdez and 'no name' Mom.
Juan Lorenzo Valdez and Josefa Salazar.  [this one pieced together by the testimony but missing a generation].

This one is a bit harder, and talking the thought process out with Patricia S. Rau, we can't come to any conclusions, just a dotted line.
Ruperta Luna b. 1837
Her father, Juan Luna married Maria Francisca Garcia
His parents, Ysidro Luna married Maria de la luz Valdez, whose padrinos when they married were Domingo Valdez and Magdalena Valdez. Domingo the son of Rosa Valdez and Magdalena the daughter of Ygnacio. For sure a dotted line up the Valdez lineage, but how does that work out in a chart and to whom?  Clearly from the family and they descend from Jose Ruiz Valdez and Maria Hernandez Cabrera Medina.

Posted by Henrietta at 1:30 PM No comments:

In continuing the Plaza Colorado Grant granted to the Valdez siblings, there is one more document dated 22 September 1798, that states Lorenzo Valdez and Juan Domingo Valdez, the former stated that he owned land by inheritance from his father, Francisco Valdez and he did sell to Juan Domingo Valdez for 200 pesos.  Bounded by lands of Lucercio Martinez and Ysidro Luna. (frame 585)

A new name here is Francisco Valdez as a father of Lorenzo Valdez; could this be the next generation?

At the neighboring grant known as Plaza Blanca and first granted to Manuel Bustos on 18 May 1739 the lands are bound by Vicente Jiron, Rosalia Valdez and the hills and river. (frame 472)

Ruperta de Luna claims the land by inheritance on her mother's side a great grand-daughter of Manuel Bustos.  (frame 429)

Juan Lorenzo Valdez heirs, are Pablo Gallegos through his grandmother; the grandpa of Jose Luz Gallegos was a brother to the father of Pablo Gallegos; Reis Gallegos by purchase; Jose Maria Chavez by purchase; Maria Manuela Valdez inherited from Julian Valdez and the sons of Maria Manuela Valdez claim through Aniceto Moya by inheritance from his father; Ruperta Luna claims by inheritance from her father.  Dated December 1885"  Testimony of Jose Maria Chavez

Posted by Henrietta at 8:21 PM No comments:


This land grant needs to be studied quite a bit more as there are many relations here that otherwise would end up as brick walls.  Just a few frames and it tells its own story about these three siblings.  It also summarizes that Ygnacio Valdez married Juana Martin and they had several children baptized at Santa Clara.  Another frame mentions that Rosa Valdez had a son named Juan Domingo.

Frame 528
Names her brothers as part of the land in Abiquiu – Ygnacio and Lorenzo.

By inheritance, Julian Valdez leaves his daughter Maria Manuela Valdez lands which goes to her sons.  Aniceto Moya gets land from his father and Ruperta Luna gets her land via her father [is this Miguel Luna with Catalina Valdez and shes’ a descendant of these Valdez’s]?

Frame 564
Jose Maria Chavez acquired (purchased) the land from the children of Juan Domingo Valdez the son of Rosalia Valdez.

Jose Maria Chavez acquired the lands from his father, and Soledad Martines who was married to Jose Antonio Baldez an heir of the original land grantees.

Margarita Valverde Baldez whose husband was a grandson of Lorenzo Valdez.

Posted by Henrietta at 7:57 PM No comments:


Manuel Fernandez son of Bartolome Fernandez and Maria Luisa Tenorio, native of the villa of Santa Fe, occupation weaver, 5'5" tall, 19 years old, CAPR (Roman Catholic), bald, black eyebrows, brown eyes, full faced-beard, fair skinned, pockmarked.  He fills the position in this presidio of Santa Fe on 1 February 1768, in place of Bernardo Bustamante. He was read the penalties called for in the ordinance…having been advised that this is the explanation (justification) and no excuse whatsoever will be accepted from him; signed. Those being witnesses were the Sergeants Antonio Guerrero and Pablo Sandoval.  Manuel Fernandez (rubric)