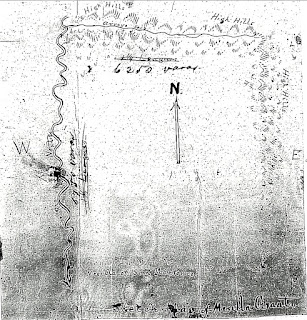 In the Mesilla de San Ildefonso Grant we find some interesting family groups and testimonies that appear in the adjudication of the grant itself, initially made to Jose Trujillo.

First made to soldier, Jose Trujillo (Antonia Lujan) on April 23, 1700, he later asked for more land as he was stationed at the puesto at Santa Cruz and needed more grazing land.  Then a Captain, he was granted the additional lands on July 15, 1709.  Jose Trujillo does sign the document, showing that he knew how to sign his name.  His witnesses were Bartolome Sanchez, Domingo Martin and Jose Manuel Gilthomey with Roque Madrid putting him in possession of the land in 1700, these lands today likely known as Mesilla near Española.  Juan de Ulibarri is the acting government official in the second piece of the land dated 1709.

The lands were in his family and in 1735 upon his death, his second wife; Antonia Lopez is filing for her share and her own children.  Jose Trujillo’s actual death is given as December 5, 1732 at El Paso del Rio del Norte. A Diego Trujillo, resident of said Paso, was the executor of the estate.  The children from the first marriage were part of the land distribution of this grant.  They are Maria (Cristobal Tafoya), Jose, Bartolome and Ysidro, all Trujillo’s.   Lands were set aside for them all including land for Antonia Lopez and her four children, (in this I think they are counting one of her children and the three from his first marriage).   The second land grant was known as Arroyo Seco and when you drive from Pojoaque to Española you see signage for an area called that, which are likely these same lands of grant number two.

On November 7, 1802, married Matias, legitimate son of Juan Lorenzo and Ana Maria, both deceased with Maria Paula, legitimate daughter of Francisco Tomas and Francisca.  Witnesses:  Loreto and Juan Domingo, all residents of Nambe.  (41)

On February 22, 1792, married, Asencio Chilaque, widower with Antonia, widow of this Pueblo.  Witnesses:  Antonio Chaves and Juancho of the Pueblo.

This first record is the one indication that Manuel Ricardo Maria Romero uses the Marquez name as signified in this baptism.  Although he doesn't use it often, just twice so far, it makes one wonder why?

Baptized on April 24, 1806, age 3 days, Jesus Maria, son of Manuel Romero or Marquez and Maria Paubla Baldes, godparents were:  Francisco Trugillo and Maria Lugarda Romero. [AASF, Pojoaque, 8:83] Lugarda Romero is the daughter of Matias Romero and Maria Manuela Roybal.  Our first tie into the Romero line of this area.

So did his mother pass away and on her deathbed let him know who his father was?  One naming pattern for the Romero's is Juana Maria, there appear to be at least three of them in the Jose Romero and Nicolasa Trujillo line.

Thoughts:  Did Manuel use Marques as that could have been his father's name.  Or is that his mother's mother's name?  More things to look into.  Why would he start using Marques with the birth of his first born son?


Posted by Henrietta at 7:12 PM No comments:

I'm redoing some genealogy in order to make sure I tied the correct person(s) to this family.  So in my usual manner, I am redoing the entire research and looking at original records which would be film in this case.  So first of all here is the puzzle.

Is Juana Gertrudes Romero a daughter of Jose Romero and Nicolasa Trujillo.  This couple has a child Getrudes who is baptized in Nambe in June 1741.  So is she the mother of Manuel Ricardo Maria Romero who is in the following record?  Right off, the answer would be no; WE need to find more information.

So if Manuel is born between the ages of 18-21; this would make Juana Getrudes' age somewhere in her early 30's.  Is this possible?

Additional record name a Getrudes Romero in Pojoaque.  One is dated August 1822, we find a Getrudes Romero as a grandparent to a child named Jose Ramon Mestas born to Ysidro Mestas and Maria de Jesus Romero; would this Maria de Jesus be a sister to Manuel Ricardo? At this point, need to do further research to ascertain who she might be related to.

On March 30, 1791, married and veiled with the permission of this father, named Juan Antonio, legitimate son and natural child of Juan and Francisca with Maria Gertrudes, legitimate and natural daughter of Geronimo and Margarita, deceased, residents of Pojoaque.  Witnesses:  Juan - fiscal mayor Pojoaque, Pasqual Juanico and Juan Antonio.  (24)

On this day 1st of November 1788, I married and veiled Mathias Reyes, Indian, widower of Ana Maria, with Francisca Cheye, Indian, single, legitimate daughter of Ysidro Muri and Francisca. Witnesses:  Juan Yelmo, Pasqual Chey and his wife, Josefa Ocu, all Indians of this Pueblo of Pojoaque.