After applying for a land grant in the Pojoaque Valley, Juan de Mestas takes possession with Roque Madrid officiating the ceremony.

On the tenth of the month of December, of the year 1699, I, Lieutenant General, Roque Madrid, Chief Alcalde and War Captain, of this Jurisdiction for his Excellency Pedro Rodrigues Cubero, Governor and Captain General did execute the Royal possession to Juan de Mestas, resident of this place, from the side of a hollow and above a house lot and from said side of hill and lot, the line runs from east to west to the river, below the Pueblo of Pojoaque towards the Pueblo of Jacona to a bluff, within which there is given him the three fanegas of planting land, and from north to south along said River to the hills descending from Cuyamungue without including any of said land of the said Pueblo, but including the appurtanances of the Pueblo of Jacona and from north to south along the said Pojoaque River, where the junction of the rivers is from a stake which is driven in said hollow. What it may so appear, I signed this with one of my attending witnesses who knew how to sign, and who by request-signed for the other and with Salvador de Anaya Almazan instrumental witness et supra, Roque Madrid, Salvador de Anaya Almazan, Jose Manuel Giltomey, at the request of Jose Madrid, Jose Manuel Giltomey.

On December 8, 1787, married and blessed, Rafael Serrano, español, widower of Elena Lobato and resident of Taos, with Maria Ysabel Lucero, widow of Manuel Begil (Vigil), and resident of this mission. Witnesses: don Gaspar Hortiz and his wife, doña Francisca Martin, resident of the same.

© Henrietta M. Christmas
Posted by Henrietta at 5:34 PM No comments:

On January 9, 1787, married and blessed, Jose, widower with Luciana, widow of Juan Lorenzo, deceased Indian, from the Nambe Pueblo. Witnesses: Juan Poviche and Maria Getrudes, his wife, both Indians.

© Henrietta M. Christmas
Posted by Henrietta at 3:27 PM No comments:

Visit the exhibit hall online to see who will be in Albuquerque during the Family History Expo, April 13-14, 2012 at the Crowne Plaza Albuquerque.

http://www.familyhistoryexpos.com/viewexhibitdetails.aspx?exid=66&eid=51
Posted by Henrietta at 8:57 AM No comments:

Email ThisBlogThis!Share to TwitterShare to FacebookShare to Pinterest
Labels: Expo 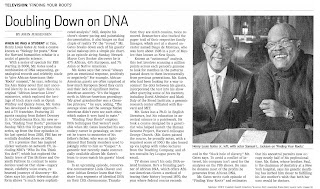 In the Wall Street Journal this morning, I found the article about PBS working on New Mexicans. About a month ago, Rick Hendricks, our State Historian, asked for some information on Linda Chavez, who I passed onto Ronaldo Miera, President of HGRC. Little did I know then, they were also working on Adrian Grenier, whom I did quite a bit of genealogy on his ancestry and one specific Native American line. As PBS told me later, they would focus on Diego de Montoya as a common ancestor, although Grenier also descends from Hernan Martin Serrano. These episodes will start filming here in New Mexico this coming week and will be part of this 10 part series, but towards the end, like 8 & 9.

I like these a bit more than the Friday night version of Who Do You Think You Are. They seem to be more down to earth for me. So I look forward to seeing all these ten episodes.

Bennett Greenspan : Family Tree DNA President and Chief Executive Officer. This life-long genealogist turned his favorite hobby into a full-time profession when he founded Family Tree DNA in 1999. Family Tree DNA has made a marked impression on the worlds of science and genealogy. This wildly successful commercial venture is a genetic genealogy company based in Houston, Texas. A partner laboratory, Arizona Research Labs, is housed at the University of Arizona. Family Tree DNA offers its customers analysis of YDNA, mtDNA, and autosomal DNA for genealogical purposes. The analyses are based on DNA samples collected with a cheek swab kit provided by Family Tree DNA.

For more information visit the site below.

https://www.familyhistoryexpos.com/viewevent.aspx?eid=51&past=0#edesc
Posted by Henrietta at 8:49 AM No comments:

Email ThisBlogThis!Share to TwitterShare to FacebookShare to Pinterest
Labels: DNA

Martin Chaves, born about 1838 at Cebolleta, New Mexico, enlisted in the 1st Cavalry Company K Regiment. His muster card notes that he was 25 years old, 5'9" tall, dark complexion and black eyes and hair. His official enlistment date is September 21, 1863 at Ft. Craig New Mexico by Lt. Young. He term was to last three years.

This is the Regiment known as the Kit Carson Regiment as he was the Colonel at the time. New Mexico was not again invaded by the Confederates after the expulsion of the Texans in 1862, but the numerous Indian tribes of the Territory and the adjacent eastern plains took advantage of the war to indulge in frequent uprisings. The 1st cavalry was almost continuously employed during its term of service in expeditions against the hostile Navajos, Apaches, Comanches, Kiowas, Utes,.etc., and detachments of the regiment were stationed as garrisons at the various military posts of the territory such as Forts Bascom, Canby Stanton, Wingate, Sumner and Whipple, according to the varying exigencies of the Indian service.

© Henrietta M. Christmas
Posted by Henrietta at 10:22 AM 1 comment:

Agustina Armenta was born April 3, 1811 at San Ysidro (Jemez), New Mexico. According to her baptism record she's the daughter of Pedro Antonio Armenta and Maria Francisca Montoya. Agustina doesn't show up again until she's having a child named Tomas, who is born December 1837 and is in the Cochiti Baptism book, (NMGS, pg. 249). In that record we have the following information:

The next time we see this couple, is in the 1845 San Ysidro Census, with Agustina now appearing to be married to a different man - Juan Montoya, 28, Agustina Armenta, 27 and Salvador 3 (their child).

Deciderio (supposed husband from first marriage), is in the census two houses up living with his parents and now age 30. I am assuming there aren't two brothers with the same name.

Problems to solve:
1. Are there two Agustina Armenta's?
2. The one married to Deciderio Valdez, did she die along with Salvador the child?
3. If there are two Agustina Armenta's, who is the one married to Juan Montoya?
4. Who is Juan Montoya and who are his parents?
5. Agustina goes onto live at Chilili and is a widow for quite a long time. She's in the 1870 census pg. 5, and again in 1880, she's living at Chilili.

© Henrietta M. Christmas
Posted by Henrietta at 10:25 AM 1 comment:

On November 20, 1786, married and veiled, Jose Trujillo, Indian widower of Marta, of this mission with Maria Candelaria, single, criada of don Jose Campo Redondo, natural d/ Maria Antonia, single and unknown father, of this jurisdiction, wit/ Andres and his wife, Maria Concepcion, Indians of this mission.

© Henrietta M. Christmas
Posted by Henrietta at 2:40 PM No comments:

I'm posting this to see if anyone has any ideas of who their parents are.

With the following exceptions of Maria Dolores, whose baptism states she is mestiza, all of the records record them as espanol. Second, Gregorio only uses that name on his marriage record and that on the baptism of Maria Rosa. Yet, I think he is one and the same.

On October 8, 1753, a Joseph Rodriguez marries a Manuela Lujan, with witnesses Antonio Abyeta and Rosalia Lujan. Can this be a brothers marrying sisters type of connection? Are these gals the children of Juan Antonio Lujan and Rosalia Abeyta who are living in Soledad in 1750?

So I looked in Santa Cruz, Nicolas, Pedro and Cayetano all Rodriguez are living there. Cayetano has one son in the 1750 census. But I didn't see the others listed. Not sure if there is a connection here.

Anyone who can give me some insight on this puzzle, thank you ahead of time.

Juan Antonio Rodriguez, the son of Jose Rodriguez and Maria Samano, came to New Mexico with his parents during the Post Revolt Recolonization. From his will, we know that he was married to dona Maria Francisca Fernandes and they had no children. But he does state, that he had two natural children named Fransisco Javier and Marcos, who left the amount of $2,940 upon his passing. His executors are Captain, Juan Fernandez, his wife dona Maria Francisca Fernandez and Jose Antonio Rodriguez, his brother. Juan Antonio leaves to two of his siblings, Gertrudis and Jose, heirs to the remainder of his property.

One statement in the estate is that of Juan Manuel Chirinos, the church warden, who had received from Captain Juan Ferndandes de la Pedrera $24 pesos for land given to his son-in-law, Captain Juan Rodrigues, dated April 1738. He also delivered to Juan Antonio Rodriguez, the nephew of the deceased, $179 in sheep and cattle. The total of his estate in 1738, was $7,375.75, debts he owed of #135.25 and debts due him of $50.

So who was the natural mother?

© Henrietta M. Christmas
Posted by Henrietta at 2:32 PM No comments:

Email ThisBlogThis!Share to TwitterShare to FacebookShare to Pinterest
Labels: Rodriguez, Santa Fe, Will

Lucas de Moya and his wife, Gertrudes Gonzales, from this villa, she obtained an inheritance from her father, Juan Angel Gonzales and her mother. They sold land to their nephew, Manuel Moya with the exception of the corn fields which Lucas plants every year, for the price of $150 pesos. The land is located down the river of this villa of Santa Fe. Signed Lucas Moya, for his wife, Gertrudes Gonzales, Francisco Guerrero, Juan Francisco Niño Ladron de Guevara and Santiago Fernandez. Dated May 18, 1766 in Santa Fe.

Posted by Henrietta at 12:23 PM No comments:

Land sale to Juan Garcia de Noriega, August 20, 1711. He mentions his first wife, Josepha de Thamariz, who left the land to him and their deceased son. Sells the land for 40 pesos. The borders are on the opposite bank of the river; bounded on the north by the river, on the south the lands of Salvador Archuleta, east the lands of Francisco Thamariz and west the lands of said Juan Garzia. A total of one half a fanega of planting corn. Witnesses: Cristobal de Gongora, Miguel de Sandoval and Alfonso Rael de Aguilar.

Francisco Benavides married three times, first to Josefa Tamaris sometime before 1708, when he married a second time to Jacinta Romero and a third time to Valentina Martin in 1731 at Santa Cruz de la Cañada. In all he had thirteen known children.

Posted by Henrietta at 12:41 PM No comments:

Felipe Maes enlisted in Company A of the New Mexico Volunteer Cavalry on September 24, 1864, he first served under Capt. Baca of the 1st Regiement. His last commanding officer was Capt. Brady and in Maes's pension file, attests to this fact, that Brady was killed by the Bill the Kid Gang. Felipe Maes was discharged on October 12, 1866.

Maes was injured and taken for dead when his horse fell on him. He was taken to Ft. Stanton and hospitalized; in later years he suffered from his internal injuries.

He actually died April 8, 1913 from pneumonia at Lincoln, NM. His mother was Petra Maes and Felipe was married to Anastacia Mirando on March 12, 1869 at Ft. Stanton.

After Congress made some changes to the Civil War Pension Acts, his widow, Maria Anastacia Maes, received a monthly rate of $50 right around the time that Felipe dies, until her death. The application was made in May 1913.

© Henrietta M. Christmas
Posted by Henrietta at 9:49 AM No comments: