On September 25, 1785, married and veiled, Juan Lorenzo, Indian, widower of the Pueblo of Tesuque, with Getrudis, single Indian of the same Pueblo, legitimate daughter of Agustin and Maria, both deceased. Wit/ Joaquin, fiscal mayor, Juanico the Governor.

On November 10, 1785, married and veiled, Juan Lorenzo, Indian single son of Xptobal and Rosa, both deceased with Maria, single, Indian, daughter of Juan and Juana. Wit/ Juan and Juana, his wife; all residents of Tesuque Pueblo.

On November 26, 1785, married and veiled Andres, Indian resident of Galisteo, legitimate son of Juan Antonio and Maria, both deceased with Manuela, Indian, single of Pojoaque, legitimate daughter of Joaquin and Lorenza, deceased. Wit/ Antonio Chaves and Ana Silvestra, his wife, all residents of Pojoaque. (14)

© Henrietta M. Christmas
Posted by Henrietta at 9:24 AM No comments:

Josef Marcos Delgado, son of Retired Captain don Manuel Delgado and doña Josefa Garcia de Noriega, a simple soldier of the Royal Presidio of New Mexico, with permission from the officials and of the Señor Governor of this Province, I ask and beg with the utmost respect, being superiors and with the most pleasure it serves to consider the distinction; in case of the service of my said father and with compassion that beseeches you I take credit and favor to solicit that I receive a grand land grant.

As it states, signed Nava (rubric)

In the Spanish Archives of New Mexico a document dated 1713, a land deal which starts off with the person stating who she is - I, Juana de Sosa Canela, widow of the adjutant Salvador Matias de Luera. She then declares having a lot and house (un solar y casa) near the cemetery of the Church, which is of course in this villa of Santa Fe, which my deceased husband, obtained in a royal and legal sale as shown by the deeds of sale and which are in my possession. The boundaries are east the lands of the Convent and the cemetery; west, the house of Mateo Trujillo; north the street where I have built my house; south is the Rio Chiquito. I declare to have sold to Miguel Carrillo, on a portion of said land, ten varas of wall, single adobe, good and well constructed on said strip of land, there is a patio, measuring from east to west, 13 varas, from the foundation of said cemetery, for a sum of $75 pesos. She is fully satisfied.

Reference: SANM I, Twitchell Archive No. 162
Posted by Henrietta at 12:43 PM No comments:

On August 12, 1785, married Juan Domingo Largo, widower of Francisca, with Maria Encarnacion Martin, widow, Indian of this Pueblo of Abiquiu and of this Pueblo of Nambe. Wit/ Eusebio, fiscal mayor, Miguel Conejo and his wife. 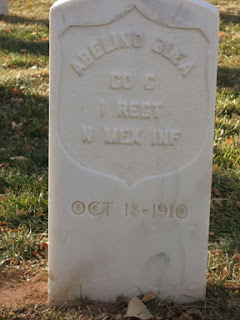 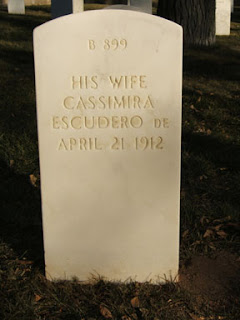 Over the decades I have spent many hours just walking around this beautiful cemetery looking at all the headstones and what they might be telling us. We don't have too many Civil War Headstones that occupy this cemetery, but I found one in 2005 that was of interest to me. Abelino Blea who died October 18, 1910. Unfortunately, it didn't have his birth date, but it does have his company and on the reverse side, his widow's name as she was later buried with him and her name is Cassimira Escudero. She would have passed on 100 years ago this year.
Posted by Henrietta at 3:15 PM 1 comment: 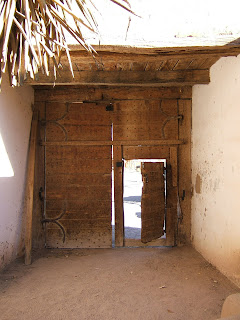 Lately, I've been thinking of putting up some new gates, especially around my garden(s) and so I though looking at some photos of old gates and carretas would be kind of nice. I like to photograph them when I can and have a few really good pictures and some aren't so good, the angles are just weird. But since I live in Corrales and we are an agricultural village, I thought this one from our Old Casa San Ysidro has some character. Now I need to figure out how to incorporate that into a gate(s). The carreta they have on site is pretty cool too, but I need gates before carts.

For those who don't know what a zaguan is, it is the opening of the gate between the house/courtyard and large enough to let animals come through in case of a dire need. Usually feels like walking through a large hallway. There is one at Casa Sena from the sidewalk into the placita in Santa Fe. As you can see from this picture, it is a double gated version, for people the smaller opening, which is what you can see open in the photo and then the larger opening would be for animals.
Posted by Henrietta at 3:15 PM No comments:

We are excited to announce that HGRC has joined the 1940 U.S. Census Community Project to help index the 1940 U.S. Federal Census! Indexing records from our state, we will be an essential part of this monumental grass-roots effort that will put one of the richest genealogical data sets in the world online, complete and free of charge forever.

and register to participate with our society. Simply select

Thank you in advance for your participation. We look forward to the impact this resource will have for researchers of our area and so many others.

Posted by Henrietta at 2:41 PM No comments:

Email ThisBlogThis!Share to TwitterShare to FacebookShare to Pinterest
Labels: 1940 Census

About the 1940 Census Community Project

Upon its release, the 1940 U.S. Census Community Project, a joint initiative between Archives.com, FamilySearch, findmypast.com, and other leading genealogy societies and organizations, will coordinate efforts to provide quick access to these digital images and immediately start indexing these records to make them searchable online with free and open access.

Interest in the 1940 U.S. Census is both significant and sentimental because it documents what is often referred to as “The Greatest Generation” of U.S. citizens. As a group, these are individuals who:

There are many people still alive today who will be able to find themselves in the 1940 U.S. Federal Census. Others will be able to readily connect with relatives they knew personally or through family stories. Imagine the great resource this will be to current and future society members!

Posted by Henrietta at 2:39 PM No comments:

Email ThisBlogThis!Share to TwitterShare to FacebookShare to Pinterest
Labels: 1940 Census

© Henrietta M. Christmas
Posted by Henrietta at 5:39 PM No comments:

Mocavo.com - Try It or Not!

Well I decided to check out some new sites for researching New Mexico names. I visited the Mocavo exhibit at RootsTech just to see if they had anything more than what I had been using. They really didn't have new info on how to best use their site. For free though you can view millions of records if not billions. I would discourage paying for their service, unless you find something first for free. They want you to register, which I did, but still didn't find anything new on my Pedro Ygnacio Sanchez.

I was seriously dissapointed when I noticed they had scoured the Great HGRC Pedigree Database. They have information from genforum and a few other query places. I also found one off my own website Trementina.com. So in the end I didn't find anything new. As usual, most of the stuff on the on-line searches don't really work out for me. Someone with a lot more time on their hands and likes to surf the web, might actually have better luck.

My usual thoughts on these sites, when it comes to New Mexico, they wait to put new stuff on or never do. But it never hurts to look, especially if you have some unusual names that stand out.
Posted by Henrietta at 6:50 AM No comments:

End of 1784 marriages for Pojoaque.

© Henrietta M. Christmas
Posted by Henrietta at 8:19 AM No comments:

On July 28, 1784, married and veiled, Juan Andres, single, Indian of San Yldefonso and son of Francisco and Theresa, both deceased with Maria, single, daughter of Antonio and Maria, deceased. Wit: Juan Esteban and Maria Antonia, with others. (8)

On August 3, 1784, married and veiled, Juan Lorenzo Cajuebe, single, Indian of the San Yldefonso Pueblo, with Ynes Ojuapobe, a Tesuque Indian. Wit: Francisco Nusair and his wife and others.

On August 11, 1784, married and veiled, Jose Ramon, Indian from San Yldefonso, son of Antonio and Angelina, decesed with Maria Luissa, Indian of Santa Clara, widow of Thoribio. Wit: Juan Tafoya and his wife Juana Tampobe and others.

On August 16, 1784, married and veiled Juan Felipe, widower of Maria with Angelina, widow of Ysidro of the Pueblo of San Yldefonso. Wit: Juan Antonio and his wife Getrudis and others.

On August 18, 1784, veiled Juan Bautista Cordova and his wife Rosalia Martin, who married in the villa of the Cañada in time forbidden. (9)

Well just looking at some of the people in my genealogical database, I found that I have 29 couples who were married on this day, including my own parents.

Being that it is only a week away from Valentine's Day and that Saint Valentine's Day has been around for a few centuries, what do you think these folks were doing back in their day? A Honeymoon seems out of place here, but maybe some kind of wedding fiesta.
Posted by Henrietta at 2:17 PM No comments:

On May 20 1784, the priest in Pojoaque, veiled the marriage of Santiago Benavidez and his wife, Antonia Paula Gimenez, residents or vecinos of Tesuque. This record indicates that they likely married during Easter and the priest waited to perform the veiling, when that Holy Time was over.

© Henrietta M. Christmas
Posted by Henrietta at 12:02 PM No comments:

Pedro Antonio Ortiz, a resident of this villa of Santa Fe, is sick in bed and orders this will be made. I was married and veiled to Maria Ysabel Pacheco, for 32 years and of this marriage we had 12 children: Maria Ygnacia, Jose Manuel, Maria Francisca, Sesaria, Maria Ynes, Maria Francisca de Solis, Jose Encarnacion, Antonio Jose, Jose Francisco, Maria Guadalupe, Maria Trinidad and Maria Anastacia Abad.

I declare that when we married, I brought into our marriage, animals, a house, and various lands. He owns yet more land, animals, equipment and leaves that to his wife and children.

He voids the will be made in 1849 and names his new executors as Simon Apodaca and Jose Francisco Baca, January 17, 1852, which he signs and witnesses by: Tomas Baca, Jose Miguel Montaño, Jose Manuel Baca and Mariano Belarde. Filed and recorded on March 11, 1873.

© Henrietta M. Christmas
Posted by Henrietta at 7:13 AM No comments:

Email ThisBlogThis!Share to TwitterShare to FacebookShare to Pinterest
Labels: Ortiz, Santa Fe, Will

I, Euquerio Lovato, am sick and dying. I was married and veiled to my now deceased wife, Maria de Jesus Garcia; and we had the following children: Jesus, Maria Francisca and Maria Rita, who are my rightful heirs.

I own a house with 60 varas of land here in Santa Fe and I own a ranch called el Correcito, in San Miguel del Bado. Various household and farm good are noted. He leaves to his granddaughter, Manuelita, five vigas of a house on the north side. I owe another granddaughter, Leandra, 25 pesos. I owe Anastacio Sandoval six pesos, Gaspar Ortiz y Alarid, five pesos.

He names his executors as: Sabino Felipe Sandoval, signed and dated on November 6, 1866. Witnesses were: Felipe Delgado, Vicente Garcia and Jose Ygnacio Silva. Filed and recorded on July 16, 1873.

© Henrietta M. Christmas
Posted by Henrietta at 7:24 AM No comments: